The changing of eternity 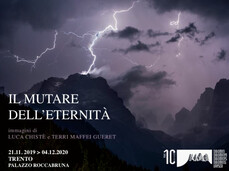 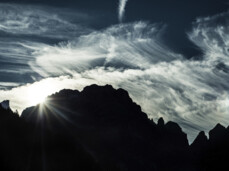 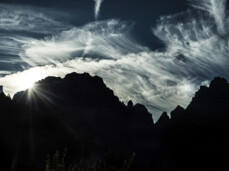 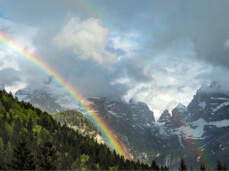 Ten years ago, UNESCO declared our mountains a World Heritage Site. This exhibition is part of the events organised on the occasion of this anniversary, as a result of the collaboration between Trentino Marketing and Trento Film Festival.

This project was born thanks to an intuition shared by the authors, Luca Chistè, sociologist and photographer, and Terri Maffei Gueret, creative talent and graphic, daughter of Mountain Guide Clemente Maffei Gueret. The exhibition consists of a series of images (more than 3,000 shots) obtained by placing a camera in Madonna di Campiglio, on a terrace overlooking the Brenta Dolomites, with a portion of the view between the Sella mountaintop and the Tosa mountaintop, with view on the Brentei and Bocca di Brenta mountain huts.

Terri Maffei Gueret could take these photos with careful and constant presence over a period of 13 month, thanks to the equipment placed on the spot by photographer Luca Chistè.

From a conceptual point of view, the project relates two distinct temporal scales: the eternal one of nature - from which the title of the exhibition - changeable in appearance, but immutable in substance, and the the limited and ephemeral temporal scale of human experience.

The lights, the atmospheres, the colours, the relationship between sky and earth, vary so much that this surprising transformation, diluted in the thousands of images collected, ends up revealing itself, making us reflect on the meaning of things and nature. An extraordinary magic of vision.

To accompany the vision of these images, Terri Maffei Gueret has searched for and collected some aphorisms on the topic, as well as some texts from books by great mountaineers. As a result, the interaction between image and word helps us to reflect even more on the relationship between man and nature.

As Henry David Thoreau used to say: "The perception of beauty is a moral test".