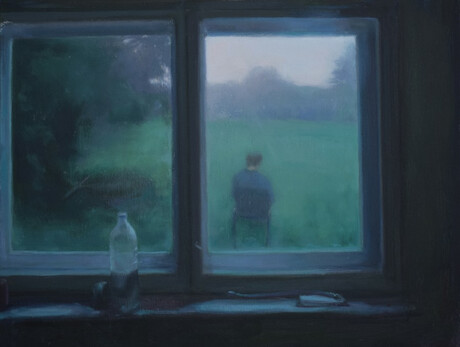 Boccanera Gallery, Trento, is pleased to present the second solo exhibition by Richard Loskot (Most, CZ in 1984), Cosmology Model, at the Main Gallery space, and The Place we call Home, Cristian Avram's project (Cluj-Napoca, RO in 1994), at the Project Room space.

Recently, Boccanera Gallery has developed its Trentine headquarters, and in its 300 square meters will be hosting the projects of two young Eastern European artists focused on a shared interest: space.

The works of both artists investigate the relationship between man and space.
In his oil paintings on canvas Cristian Avram explores the microcosm of the domestic surroundings of his home-studio in the countryside of the Romanian city of Cluj-Napoca. Richard Loskot looks at the greatness and the mysteries of the Cosmos building rudimentary devices, machines assembled with parts of everyday objects, obsolete technology and pieces of furniture.

Space is not only the extension of a subject, a box, a design but it is also the storage of neuroses and phobias of the surroundings' society. In this sense, space is not empty but full of unsettled objects. Art can represent space in its distortion, modifying the traditional way in which it has been historically perceived.

Cosmology Model by Richard Loskot focuses on the contradictions of the limits of advanced technology.
Starting from the concept of reciprocity, Richard envisions the relationship between Man and the Universe and how the unknown unleashes a series of enigmatic questions about existence in which, despite the contribution of the most advanced artificial intelligence, they remain incomprehensible.
Loskot reflects on likely banal concepts: what is a color, what is emptiness, how does a circumstance work?
Cosmology Model is a journey that starts with the bone structure of the machine and moves towards the inner perception of the enigma of the infinite.
Loskot's works are models that construct images only visible through a third piece of equipment placed strategically between the viewer and the object with the aim of translating the space reproduced by the machine in the space of consciousness. Therefore, the work always has two different stages of analysis: the whole and the one triggered by the presence of an audience.
Through the assembly of mechanisms recovered from ordinary objects, Loskot reflects on the everyday life's microcosm surroundings the human beings.
The world is coated with an unequivocal constellation of objects capable of unveiling the essence of life.

In The Place we call Home, in his oil paintings, Cristian Avram explores the collision between the inner world and the outer world, and how this oxymoron can rise states of higher consciousness.
As with Richard, Cristian starts his research from a simple concept: what are the factors that can bring a human being to call a place home and how beauty can be the key to it.
Cristian Avram recently moved from the city to a remote artist-studio complex in the countryside of Cluj Napoca.
During his first winter spent living in solitude and isolation he experienced how the post-Soviet impervious building turned into his home, portraying the transformation through the ghostly presence of humans activities in the space.
Avram's work focuses on his personal experience translating it into timeless images.
He explores the possible alterations of the environment capturing the moment between the tangible to the immaterial, from the personal matter to the public life.
The young Romanian painter reconstructs in his works an aesthetic hierarchy, portraying the organized manmade disorder of spaces occupied by human beings in its absence.
The existence of being is tangible, but the abstraction of the medium creates a place of the soul in the subject of the artwork.
The physical proportions of the space expand towards a spiritual dimension.

Both exhibitions reflection on the interchange between microcosm and macrocosm and how the coordinates of space are illegible applying variables related to irrational thought.

Richard Loskot was born in Most (CZ) in 1984, lives and works in Usti nad Labem (CZ). He studied in the faculty of Art and Architecture at the University of Liberec as well as in the Munich School of Fine Art. He has exhibited in Germany, the UK, and in Romania, as well as in the Czech Republic and Slovakia. In 2012 and 2014 he was one of the five finalists for the most prestigious prize in Czech Republic Jindřich Chalupecký prize with a special mention. In January and February 2014 participated in a residence in the International Studio & Curatorial Program of New York. In September 2104 he did a group exhibition Europe, Europe curated by Hans Ulrich Obrist, Thomas Boutoux, Gunnar B. Kvaran at Astrup Fearnley Museet in Oslo.
Currently, he is part of two group shows Nature. Arte ed Ecologia, curated by Margherita de Pilati, in Galleria Civica in Trento and Arthouse Lapidarium, curated by Lenka Lindaurová at the National Museum in Prague.
Cristian Avram, born ad Alba-Iulia, RO in 1994, is attending the first year of the Masters in Painting at the Cluj-Napoca University of Art and Design (RO).
Selected exhibitions: Talking 'bout my generation, group exhibition, Plan B Cluj-Napoca; Bridges, group exhibition, Boccanera Gallery, Milan (2018); Starpoint Prize 2017, group exhibition, Victoria Art Center, Bucharest (2017); Cutting Edge III, group exhibition, Museum of Art Cluj-Napoca, (2016).