The photographic images of Carla Iacono, with intelligent levity, tell us that the veil is not an instrument of separation or exclusion. 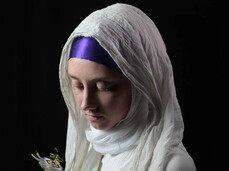 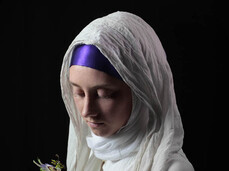 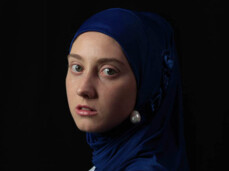 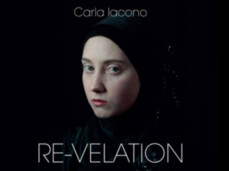 The veil used by Muslim women will continue to be subject of debate for many years, an accessory often used as a "symbol" of the distance between the Islamic world and the Western world, an area in which the rules of appearance, especially for women, are based more on "revealing" than “veiling”

As a matter of fact the situation is complicated just by the plurality of attributable meanings and the evocative power of the veil: the symbolism of the veil changes depending on the social context in which it falls, often with unbridgeable differences between the wearer and the perceiver.

Not only are there many types of veils (hi-jab or headscarf, niqab, chador, burqa) and just as many ways to wear them, but the now acquired polysemy has turned it into an emblem object of social, political, religious and cultural debates. If we analyse it from the point of view of the women who wear it or, on the contrary, reject it, the veil can be seen as a re-appropriation of identity, religious affiliation, political act, act of faith, rule of behaviour, standard of beauty, free choice, submission to God, resistance, patriarchal imposition, etc.

Carla Iacono began this project by analysing the situation of Muslim women who have immigrated to Europe, to reflect on the deception of exploitation, by focusing in particular on the hi-jab, the Islamic veil that frames the face and only covers the hair. "Re-velation" is not just a denunciation project on exploitation, but it is also related to the main theme running in all of the artistic work by Carla Iacono; the analysis of the rites of passage. In classic Islam the veil establishes precisely the transition from childhood to puberty, claiming the respect owed to the woman who would be thus protected from the “impure” looks of men. Similarly, referring to other eras, cultures and religions, the veil, when used, is always linked to initiatory events/situations (eg. marriage, mourning, the nun veil in the Christian symbolism) or as"status symbol" (eg. for noblewomen in ancient Jewish society, or in the case of the hat-veil in the nineteenth century).
From the formal point of view the portraits of "Re-velation" all have the same protagonist, the artist's young daughter; this is to avoid placing emphasis on the origin of the people portrayed but forcing the viewer to reflect solely on the polysemy of the symbol, going beyond the specificities of a country or religion. In addition, the autobiographical element contributes, as in other previous works by Carla Iacono, to emphasize the representation and to make it a genuine testimony.

The veil, constant element in the photographs of "Re-velation", is declared in different ways, sometimes with explicit references to specific cultures, sometimes in a fairytale or surreal manner, but always with the intent to reflect on the expressive language it brings. The compositions are reminiscent of the Flemish portraits of the seventeenth century, and this is the artists device to obtain a symbolic contamination between the different cultures of the East and the West; also the subjects are photographed against a uniformly dark back ground that often is confused with the dresses. The side light makes the figures emerge from darkness revealing the facial features and the details of the veils, thus symbolically and visually reinforcing the concept of revelation.

The choice to set up the exhibition in the Diocesan Museum, by placing the images of Carla Iacono in direct dialogue with one work of the Museum, which has a specific Christian value, is a way of opening up to the value of such an important garment in women's history and draw attention to its meaning, which unfortunately has recently been reduced to a symbol of imprisonment and prohibition whereas it was born as an element of distinction and protection of what was considered sacred.
The exhibition was originally set in the Diocesan Museum of Genoa. Now it is arrived in Trento, confirming the strict connection between museums belonging to Amei (Association of Italian Ecclesiastical Museums). Why talk about the veil? Why talk about it in a diocesan museum? Because, as Giuseppina Muzzarelli writes, “the veil is a mine to be defused”. A delicate and urgent operation that a museum and an exhibition, Re-velation, can help to do so. The photographic images of Carla Iacono, who express this delicate theme with intelligent levity, tell us that the veil is not an instrument of separation or exclusion. The veil is a veil.