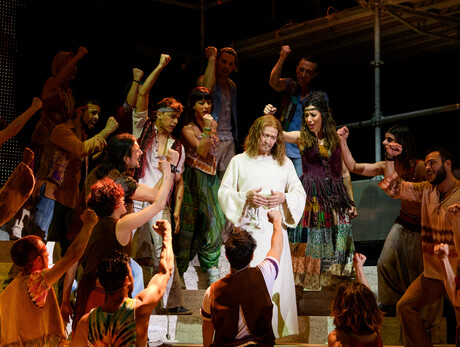 Jesus Christ Superstar, the record musical, will be on stage in Trento.

Ted Neeley is best known for his performance as Jesus Christ in the film Jesus Christ Superstar, as actor and singer.

Neeley has brought all over the world the musical that has enchanted millions of people and now he is on stage with a not-to-be-missed show with live music and singing.

Jesus Christ Superstar, the masterpiece by Andrew Lloyd Webber and Tim Rice, is now known to history as one of the most famous and beloved musical of all time, throughout the world. The Italian language version signed by Massimo Romeo Piparo turned 21 years old and now boasts several records: four different editions, 11 consecutive years on stage in Italian theatres from 1995 to 2006, more than 1,200,000 listeners, more than 120 artists who took turns in the cast, and more than 1,300 performances.

Back on tour in Italy, here's the show that has obtained the greatest success with audiences and critics in recent years. It's an event with an exceptional protagonist known throughout the world in the title role, Ted Neeley, who gave a legendary and unforgettable stamp to the role of Jesus in the historic film by Norman Jewison's (1973).

It is the first time that the authors of the show have granted to an Italian company the possibility of a European tour of the musical. Three generations by now have enjoyed its soundtrack and the important values it passes down.