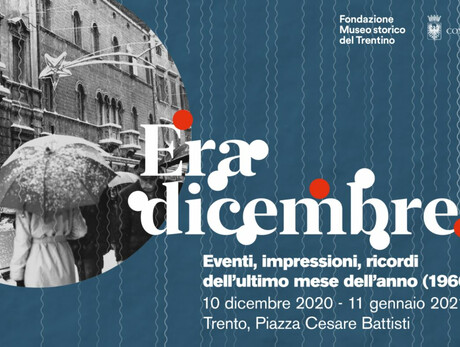 "Era dicembre: eventi, impressioni, ricordi dell'ultimo mese dell'anno. 1960-2000" ("It was December: events, impressions, memories of the last month of the year. 1960-2000"), is produced by the Fondazione Museo storico del Trentino (Trentino history museum foundation) in collaboration with the provincial Councillorship for Culture of the Municipality of Trento.

The installation, set up as part of the "Trento, Christmas City" series of events, and placed outdoors so that it can be viewed in complete safety and in compliance with the rules for the containment of contagion from the corona virus, will be open every day until 11 January 2021.

December is the month of short days, of evaluations and parties; of snow and good wishes; it seems like a month that is always the same, but it is not.

The local chronicles, the weekly cultural magazines, the photographs that turn from black and white to colour, show us the small but continuous changes that society has undergone.

The newspaper articles talk about the increase in consumption and the expansion of Trento, but also about the traffic and the difficulties that continue to exist, despite the overall increase in the population's standard of living.

The family films take us back to the living rooms and dining rooms of the sixties and seventies, and in Super 8mm film for Christmas.

The Christmas lights that illuminate the streets and the presents under the tree change, but December - with its family and religious rituals - offers an excellent window to get to know each other better.