The ‘case’ of Simonino da Trento, from propaganda to history 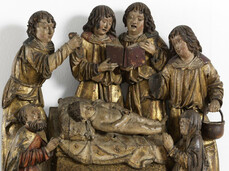 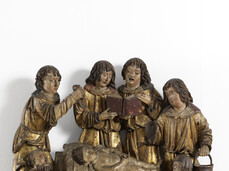 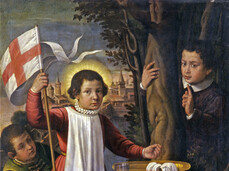 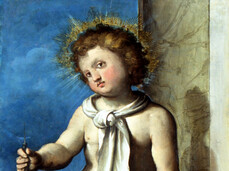 From 14 December 2019 to 15 September 2020, the Museo Diocesano Tridentino presents an exhibition entirely dedicated to the 'case' of Simonino da Trento, a child presumed victim of Jewish ritual murder, venerated for centuries as an innocent 'martyr'. The story, dating back to the 15th century, could today be defined as a resounding fake news of the past, in which anti-Jewish sentiments, devotional needs and ecclesiastical political ambitions are intertwined. The exhibition aims to draw the public's attention to one of the darkest pages of anti-Semitism, to stimulate reflection on the mechanisms of 'building the enemy' and the power of propaganda.

Trento, 23 March 1475, Holy Thursday. Simone, a two years old child, mysteriously disappears in the alleys of the ancient alpine city. On Easter day his lifeless body is found near the house of Samuel, one of the major exponents of the small local Jewish community. Believed responsible for the kidnapping and murder of the child, the Jews are immediately imprisoned, tried and, on the basis of confessions extracted by torture, sentenced to death. The accusation was based on the belief, or legend, that Jews made ritual sacrifices of Christian children in order to repeat the crucifixion of Jesus, using the victim's blood for magical and religious purposes. The little Simon (later called the 'Simonino') is immediately considered a martyr and becomes the object of intense worship, which Pope Sixtus IV forbids, needlessly, under penalty of excommunication. In fact, the prudence and doubts of the Church were not able to oppose a veneration that had been given to him and built using two powerful means of communication: images and the brand new instrument of typographical printing. Thanks to the propaganda machine, skilfully orchestrated by the Prince-Bishop of Trento Johannes Hinderbach, the true director of the entire operation, the cult of Simonino spread rapidly, succeeding in establishing itself as the prototype of all the alleged ritual murders of the following centuries.

Only in the twentieth century the critical re-reading of the sources re-established the historical truth, demonstrating the groundlessness of the accusations of ritual murder against the Jews, matured in a climate of deep-rooted anti-Jewish prejudices. On the basis of these studies the Church, in the years of the Second Vatican Council, decided to abrogate the cult of the Simonino on October 28, 1965. The exhibition was conceived in homage to Iginio Rogger (1919-2014), former director of the Tridentine Diocesan Museum and courageous protagonist of the historic revision of the cult of Simonino. More than half a century after its abolition, the exhibition aims to take stock of the 'case' of Simonino da Trento and spread a wider knowledge of this delicate and very topical late-medieval story. The wish expressed by the Archbishop of Trent Lauro Tisi, is "that this exhibition may become for everyone, starting with the Christian communities, a strong warning to keep watch so that no one dares to cloak in the name of God what inexorably wounds man and the believer".

The exhibition is part of a rich network of collaborations with museums and cultural institutions in Trento, which have believed in the project and contributed to its realization: the University of Trento (specifically the Faculty of Law and the Department of Humanities), the Archivio Diocesano Tridentino and the Fondazione Museo Storico del Trentino.

The exhibition, which extends over two different floors of Palazzo Pretorio, the prestigious location of the Museum, presents to the public more than seventy works, some of them on loan from important national and foreign museums and cultural institutions. With a language accessible to all - but without abandoning the historical and scientific rigour, guaranteed by the contribution of illustrious scholars and prestigious institutional collaborations - the exhibition reconstructs the cultural context of 15th century Trento and the circumstances that led to the charge of ritual murder.

A large part of the exhibition is dedicated to the wide and multiform artistic production generated over the centuries by the cult of the 'blessed' Simonino: paintings, sculptures, reliefs, votive offerings, reliquaries, drawings, historiated incunabula, woodcuts, engravings and photographs bear witness to the fortune and vitality of a devotion that lasted almost five hundred years. Finally, particular attention is paid to the illustrations of the protagonists of the revision of Simonino's 'case' and to the motivations that led to the abrogation of the cult in 1965.

The exhibition also presents a multimedia room, curated by Aurora Meccanica, which aims to highlight the mechanisms that led to the 'invention' of the culprit: images, sounds, texts taken from historical documents accompany the visitor on an emotional and engaging journey. Finally, the exhibition is enriched by a video with in-depth interviews and a film that testifies to the wide diffusion of the image of the false 'blessed' in the churches of Trentino, the surrounding regions and those of central Italy.

The exhibition presents to the public an important recovery: the relief showing the Lamentation on the dead body of Simone da Trento attributed to the workshop of the Swabian sculptor Daniel Mauch. Dating back to the beginning of the 16th century, the work was part of the monumental polyptych with movable doors located on the high altar of the church of Saints Peter and Paul in Trento, a building that for centuries housed the body of the alleged martyr. The relief left the church in mysterious circumstances before 1882, the year in which it was purchased in Merano, presumably on the antique market. Today the museum is able to present this important work again to its public, with the secret hope that it will remain in the city for which it was made. For this reason the relief has been chosen as the guiding image of the exhibition.

Curated by Domenica Primerano with Domizio Cattoi, Lorenza Liandru, Valentina Perini and the collaboration of Emanuele Curzel and Aldo Galli