From Portrait to Selfie

Self-representation from Prehistory to today 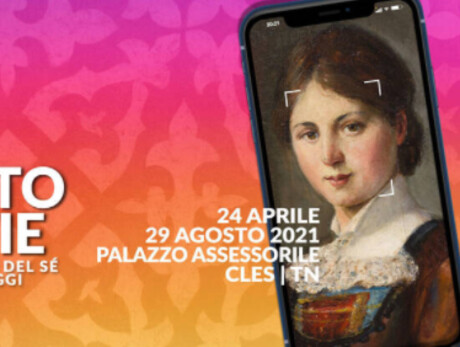 In collaboration with: Marcello Nebl

The exhibition Dal ritratto al selfie. La rappresentazione del sé (From Portrait to Selfie. Self-representation from Prehistory to today) is open to the public in the prestigious rooms of Palazzo Assessorile in Cles (Trento) from Monday 26 April until Sunday 29 August 2021.

Curated by Gianluca Fondriest, with installation design by Marcello Nebl, the exhibition was strongly supported by the municipal administration of Cles which, in these times of great uncertainty, is even more convinced that the community, among its various demands, needs culture and beauty.
As the title suggests, the exhibition Dal ritratto al selfie intends to stimulate visitors to reflect on the ancient and contemporary use of portraits and self-portraits, on the mechanisms of self-representation and on the meanings that are inevitably linked to them.
Without claiming to deal with the subject in an exhaustive manner – given its complexity – the exhibition presents, through selected works and artefacts, the approaches and tools through which humanity has represented itself over the centuries, with some historical and art-historical digressions.
The exhibition tells these stories thanks to archaeological finds and works by such outstanding artists as Giovanni Battista Lampi, Mario Sironi, Bartolomeo Bezzi, Umberto Moggioli, Fortunato Depero, Giacomo Balla, Achille Funi, Luigi Ontani, Mark Kostabi.
Undoubtedly, the portrait is one of the oldest pictorial genres that art has ever known, but what drove men and women to fix their own image on a support?
In part, the act of portrait or self-portrait is linked to humanity’s innate desire to escape the inexorable passage of time.
For centuries this has been the only way of realising another self, one that could fulfil the dream of immortality. For these reasons, the portrait is not only a pictorial genre, but the representation that artists give of an era, of themselves and their surroundings.

The portrait can also be understood as the expression of a state of mind, as a celebration, as a memory, highlighting elements such as the gaze, the posture, the gestures and also the context, the background, the clothing, the objects and the surrounding characters. Moving on from history to the present day, it is evident how portraits – or rather, self-portraits in particular – are extremely widespread in contemporary communication, as in the extremely popular habit among young people of photographing themselves, “posting” and “sharing” the image of their face on social networks. In other words, taking a selfie.