The first Escape Room inspired by a theatrical show dedicated to the mistery of the disappearance of the famous Sicilian physicist, Ettore Majorana 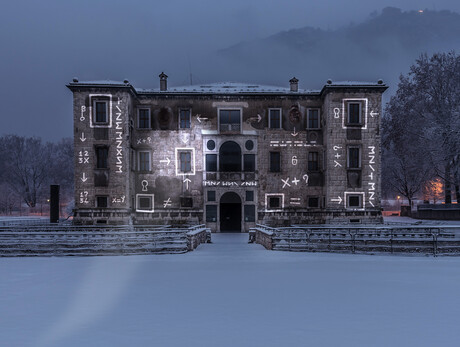 Cryptolocked Majorana is the first Escape Room inspired by a theatrical show; it's based on the mistery of the disappearance of the famous Sicilian physicist, Ettore Majorana.

Join this room escape game for an hour of fun: unveil the mystery hidden in a room, solve all the riddles, and escape from the ancient villa-fortress Palazzo delle Albere!

Organised by the MUSE Science museum and by the Haydn Foundation, it's the first of three events that will take place until the end of February at Palazzo delle Albere in Trento.

An escape room is a physical adventure game in which players solve a series of puzzles and riddles using clues, hints and strategy to complete the objectives at hand. Players are given a set time limit to unveil the secret plot which is hidden within the rooms. Sessions usually last 60 minutes. The minimum number of players is usually 2 and can go up to 6.

THE THEATRICAL SHOW ABOUT ETTORE MAJORANA: Ettore Majorana, one of the most important atomic scientists of his age, was a genious, as well as an introverted and lonely figure.

In 1938 (when he was only 31 years old) he disappeared mysteriously, leaving no trace. The case is still unresolved.

The theatrical piece "Ettore Majorana. A chronicle of countless disappearances" focuses on the scientist's mysterious disappearance, which is explored through likely and unlikely conjectures.

Places and times meet and cross, and the result is the prismatic and multifaceted narration of an enthralling personality.

OPENING TIMES AND INFO FOR BOOKINGS

This ROOM ESCAPE GAME is addressed to small groups (2/6 persons, aged over 16 years old) who want to get in the game and try to solve fun enigmas.

Those who are fond of music, opera and mistery have the opportunity to engage in Cryptlocked Majorana, one of the most wicked escape rooms of room-escape.it, dedicated to the mistery of the disappearance of Ettore Majorana (which is also a theatrical show taking place on 20 and 21 January at the Teatro Sociale of Trento).

Turns of the game: