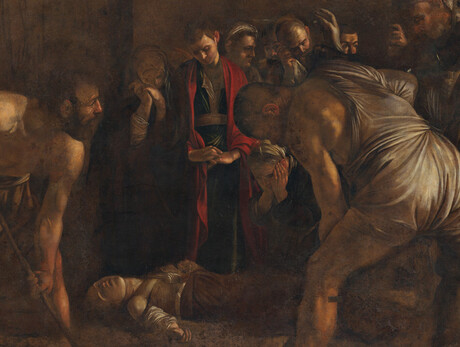 1 More images
The exhibition in Rovereto, offers the opportunity to contemplate the Burial of Saint Lucy, the oldest Sicilian work by Caravaggio, normally located in Syracuse, in the Church of Santa Lucia alla Badia. Notice: due to the measures taken to face the Covid-19 pandemic, the museum will be closed to visitors until further notice. .
Caravaggio. The contemporary The work the Burial of Saint Lucy is placed in dialogue with some precious works by Alberto Burri, master of Informal Art. In a constant dialogue between images, symbols and similarities, the exhibition is completed by a large painting entitled I naufraghi (1934) by Cagnaccio di San Pietro, works by the artist Nicola Verlato and photographer Massimo Siragusa, and a few shots that focus on the life and death of Pier Paolo Pasolini. In addition to a few core themes accentuated by comparisons with Burri, Pasolini, Cagnaccio di San Pietro and Verlato, the exhibition also displays two opening and closing pieces, one by Hermann Nitsch, taken from the Mart’s own Collection, and one by Margherita Manzelli. Finally, a work by Andrea Facco inspired by Caravaggio’s Beheading of St. John the Baptist is exhibited in the foyer of the Mart, in front of the ticket office. Until 4 December 2020 the Mart’s spaces offered visitors the opportunity to contemplate The Burial of St Lucy, the first Sicilian work by Michelangelo Merisi, known as Caravaggio, on loan from the church of Santa Lucia alla Badia in Syracuse. This large and evocative work was made for the high altar at Basilica di Santa Lucia al Sepolcro, the place at which legend has it that St Lucy was martyred. The painting appears to be set in the murky caves beneath the church, in which the martyr’s tomb is located. It is an imposing canvas completed by a mature Caravaggio, who was obsessed with the idea of beheading at the time, and was a master in composing increasingly silent, spiritual paintings. The Burial of St Lucy has returned to Syracuse for the occasion of celebrations for the city’s patron saint’s day on 13 December. At Mart, however, you can admire two incredible replicas created by the Factum Arte and Factum Foundation using revolutionary technology, which are so lifelike as to ‘deceive even the most expert eye', as Vittorio Sgarbi has noted. The exhibition will continue in Rovereto until 5 April with a work which is contributing to the Caravaggio debate: Magdalene, from a private London collection and shown for the first time at Mart. The artist painted the Magdalene in Paliano Romano, where he took refuge with the Colonna family after the murder of Ranuccio Tomassoni. Little is known of the painting’s vicissitudes from Caravaggio’s death until 2014 and there are many known versions of the painting. The two best regarded today are the Klain Magdalene, which was named after this historic collector, and a better defined and meticulous one recently undersigned by art critic Mina Gregori. These have contributed to the Caravaggio myth and triggered a heated debate between the experts, whose opinions on the subject are divided. Caravaggio. The Contemporary continues with two in-depth focus exhibitions dedicated to artists whose works recall, are inspired by or evoke a certain Caravaggesque aesthetic: Nicola Samorì and Luciano Ventrone.