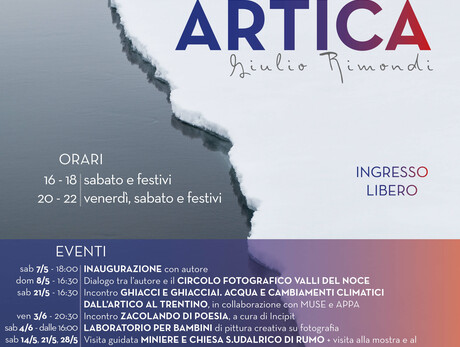 On display are two photographic series, one of the places visited and the other one under the ice of the Arctic Ocean, taken by photographer Giulio Rimondi during an artist residency in the Svalbard archipelago.

80° is the parallel of the journey, the invisible virtual line on the border between the known and the unknown, of which the Arctic becomes a metaphor and on which the meaning of the author's artistic research rests.
In this almost unreal landscape, the photographer observes, chooses and finally takes a photo. And then comes the desire to go deeper, to dive into the icy waters beneath the polar ice floe, to observe this alien universe from different perspectives.

An exhibition on a remote area of the Planet, which man can't dominate, but whose distant presence is nevertheless tangible in the recession of the ice, the first warning of a climate change in progress and destined to upset everyone. Rimondi's artistic photography is combined with a social commitment to raise public awareness of an epoch-making problem.

Precisely in this perspective of public awareness, the exhibition closes with a video projection carried out by the artist with the contribution of scientists from the CNR (National Research Council)- Institute of Polar Sciences, who comment on the works exhibited in a scientific key.

Various side events are scheduled (meetings with the author, workshops for children, guided tours).