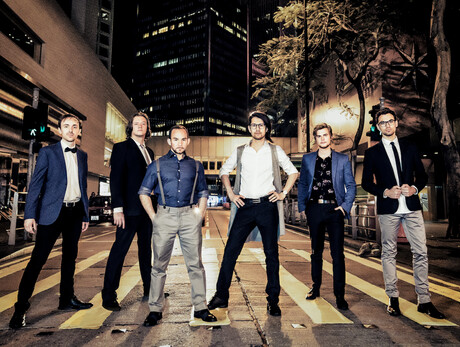 Voices from the jazz and a cappella band Accent intertwine at the foot of the Pale di San Martino. These six artists met online, all thanks to the instrument they had in common: the human voice. The members come from all over the world: Jean-Baptiste “JB” Craipeau from France, Simon Akesson from Sweden, Danny Fong and Andrew Kesler from Canada, James Rose from the United Kingdom, and Evan Sanders from the United States. They came together in 2011, having watched each other's multitrack recordings on YouTube.

The group is inspired by TAKE 6 and the Hi-Lo's, who in turn appreciate Accent’s style of blending vocals and original arrangements. Being so unique, they have been able to carve out their own niche and gain appreciation from the a cappella world and musicians like Ala Paul from Manhattan Transfer, who views them as talented vocalists. Their EP In This Together, the first album they recorded when physically all present in the same studio, was followed by Christmas All The Way.

How to get there
on foot from San Martino di Castrozza, first on the road and then along a trail, following the directions for the festival. 20 min walking time, altitude change: 30 metres, difficulty level: T

Excursion with Trentino Mountain Guides
at €15.00 per person (free for children under 8). 20% discount for Trentino Guest Card and Card di Territorio holders. Reservation required: Book by 12:00 pm the day before the excursion with the San Martino di Castrozza ApT by calling +39 0439 768867 or via the following link (coming soon).