A natural and cultural heritage

Veneto, Lombardia and now also Trentino come together to submit an application for inclusion in the UNESCO World Heritage List

After Lombardy and Veneto, now Trentino is also joining the line of supporters who want to include the largest Italian lake in the list of UNESCO World Heritage sites: a step to improve the management of coastal areas and to further enhance the Lake’s reputation worldwide.

Lake Garda is the largest Italian lake and a popular tourist destination both nationally and internationally. Hinge between the three regions, Lombardy (province of Brescia), Veneto (province of Verona) and Trentino-South Tyrol (province of Trento), the lake is surrounded to the South by the morainic hills uncovered by retreating ice, and in the higher and narrower part to the North by high mountain ranges that give it the shape and conformation of a fjord and protect it, making its climate particularly mild with a rich Mediterranean vegetation. 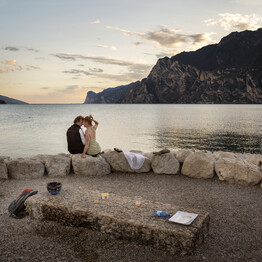 Only the northern part belongs to Trentino: here as nowhere else, the Mediterranean climate of Lake Garda blends well with the Alpine area. The surrounding mountains may tower at more than 2,000 metres, but olive and lemon trees bloom on the Lake’s shore. Which is why the Garda in Trentino is loved by mountain bikers, hikers, climbers and sailing and windsurfing enthusiasts. Next to its natural beauty, the Lake Garda area is rich in exceptional cultural, landscape, historical and architectural resources.