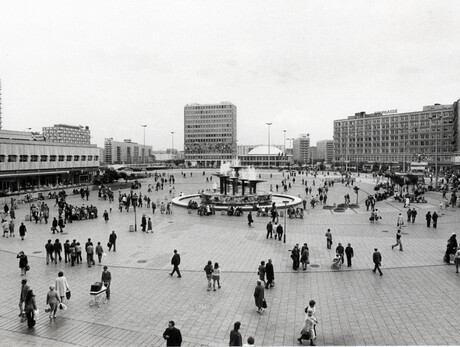 A photo essay organised on occasion of the 30th anniversary of the fall of the Berlin Wall by the Municipality of Pordenone in collaboration with the CRAF (Centro di ricerca e archiviazione della fotografia - Photography research and archiving centre) of Spilimbergo and the Fondazione Museo storico del Trentino.

Writer Eraldo Affinati, curator of this story in images and words, chose over 60 photos kept in the Spilimbergo Photography Research and Archiving Centre, taken before, during and after the collapse of that wall that became a symbol of the end of an era and of a dream that was reborn.

Berlin of the seventies and eighties, before fall of the Wall, is portrayed in the shots of Toni Nicolini, one of the most prestigious Italian names in social reportage and storytelling.

Carlo Leidi, photographer and writer and exponent of the political and cultural movements of the Sixties and Seventies, tells us about the Wall immediately after its collapse.

The photos of Eugenio Novajra and Tommaso Bonaventura give us the images of Berlin after the fall of the Wall.

The exhibition also includes images of a group of students from the Carl-Zeiss-Oberschule-Berlin and their teacher, Marion Messina, which were taken in the days following 9 November 1989: a way of restoring that fascination of the wall and, consequently, that unanimous participation at the time of its fall.

In the last section of the exhibition, a video recounts about the walls that still divide the world: from the fences of Ciudad Juàrez, in Mexico, to the armored border of Israel and Palestine, from the metal fences that run for hundreds of kilometres between India and Bangladesh, to the borders of the Spanish enclaves in Ceuta and Melilla.

The photographs are addressed above all young people, so that they have the chance to reflect on the significance of the destruction of the Berlin Wall and on the toil and costs of democracy. As a matter of fact, democracy is as precious as it is fragile, and every generation is called upon to reconquer it, day by day.