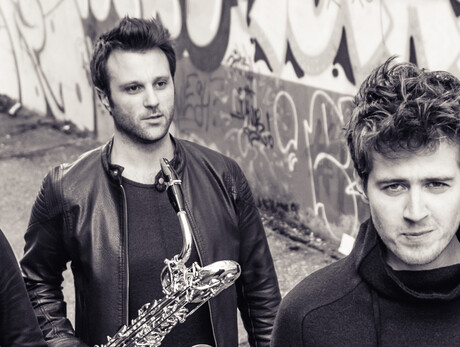 The four musicians Blaž Kemperle, Erik Nestler, Alan Lužar and Guerino Bellarosa met in Cologne where they founded the SIGNUM saxophone quartet in 2006. The saxophonists have studied in Cologne, Vienna and Amsterdam; they have been influenced and inspired by the Quatuor Ébène, Artemis Quartet and Gabor Takács-Nagy.

Award-winners at international competitions including Lugano and Berlin, SIGNUM nowadays play in concert halls and at festivals all over Europe. In 2013 they made their debut in the Carnegie Hall NY. A very special and remarkable achievement was the award „Rising Stars 2014/2015“ given by the European Concert Hall Organisation (ECHO), which took SIGNUM to such prestigious concert halls as the Barbican Centre London, Konzerthaus Vienna, Concertgebouw Amsterdam, Palais des Beaux-Arts Brussels, Gulbenkian Lisbon, Festspielhaus Baden-Baden, Philharmonie Luxembourg, Elbphilharmonie Hamburg, Konzerthaus Dortmund, Philharmonie Cologne, amongst others.

SIGNUM are constantly searching for new ideas, ground breaking challenges and intriguing artistic encounters. Their sheer joy and experimental versatility are reflected in their extraordinary programmes.

A. Piazzolla: Four, for Tango