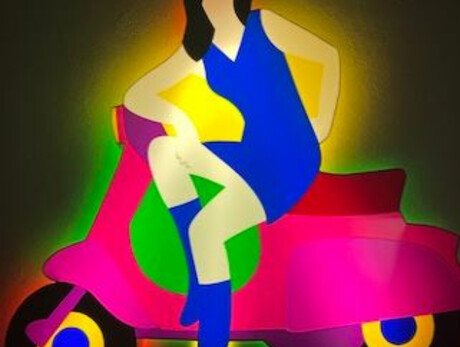 The group of New Futurists made up of Gianantonio Abate, Innocente, Marco Lodola, Plumcake (Cella, Pallotta, Ragni) and Umberto Postal are back on show at Studio d'Arte Raffaelli with a set-up that remember the aesthetics of the eighties and nineties through the works of the five artists.

Game and lightness decreed the international success of the neo-futurist movement, which developed in Milan between 1983 and 1984 and quickly spread throughout Europe. Thanks to the immediacy of reading and usable messages, the exponents of the New Futurism became prophets in the artistic sphere of a cultural climate that would have invested all areas of creativity, from design, to fashion, to music, to television.

Today, more than thirty years after the first group's exhibition in the gallery, Studio Raffaelli offers a Revival without nostalgia. Abate's assemblages, Innocente's sculptures, Lodola's light installations and drawings, sculptures, PVC tarps and works on paper by Plumcake, lightboxes, canvases and graphics by Postal compose a varied mosaic of styles and languages ​​united by a "total" vision of art.

virtual tour of the exhibition