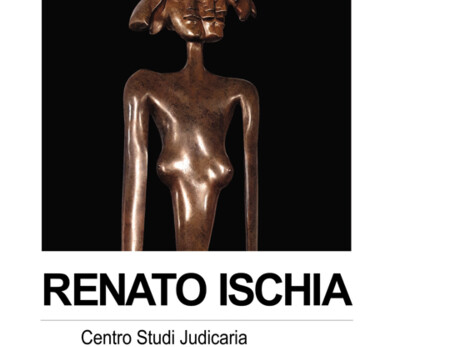 Exhibition by sculptor Renato Ischia, eighty-year-old artist from Arco. This will be the most important exhibition of the year at the Study Centre, which encloses the territory of the ancient Judicaria Summa Laganensis (Giudicarie, basso Sarca, valle dei Laghi, altopiano della Paganella, valle di Ledro and bresciana val Vestino).

But who is Renato Ischia?

According to the curators of the exhibition, "he is a sculptor of international training, endowed with fertile imagination and refined thought". After graduating at the Art Institute in Pozza di Fassa, he attended courses at the Accademia in Florence for a year and then (in October 1977) left for Paris to attend the École nationale supérieure des beaux-arts, the most prestigious academy in France.

Two years later he was chosen for a major exhibition at the airport of Orly. From then on it was a succession of events, until the 1976 exhibition, again in Paris, together with the great Italian sculptors Manzù, Marini, Minguzzi, Pomodoro, Fazzini, Fabbri and Vangi. Another important step in his career occurred when Ischia became the assistant and collaborator of Catalan sculptor Apel-les Fenosa, a close friend of Pablo Picasso.

Thirteen years later, Ischia went back to Arco, where he's still creating his sculptures in silence, among the olive trees that grow here.