The first film festival in the world dedicated to the mountains as well as to exploration and adventure, the Trento Film Festival attracts since 1952 thousands of visitors each year

The Trento Film Festival is a global benchmark for cinematography of the mountains, exploration and adventure. In the following decades, the Festival’s original model has brought to the development of over 20 theme-based festivals, today gathered in the International Alliance for Mountain Film.
In over 65 editions, the Festival has presented thousands of films and tens of thousands of books, directors, producers, authors and publishing houses from around the world. In its archive, the Festival hosts more than 4 thousand films in various formats dedicated to the mountains and mountaineering, but also to life in the highlands, with an emphasis on the Alps and the Dolomites - a collection that has no equal in the world. 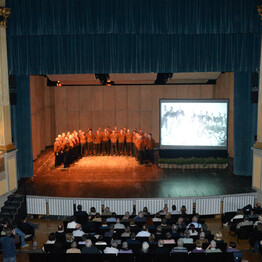 Among the members are the CAI (Italian Alpine Club) and the towns of Trento and Bolzano. In 2015, the Festival enjoyed the patronage of the Italian National Commission for UNESCO and has joined the network "Europe for Festivals" promoted by the European Commission. The film archive of the Festival could become a benchmark for scholars, researchers, enthusiasts and for the industry of this sector, and a propulsive centre for the world of cinematography, communication and the mountain in general.