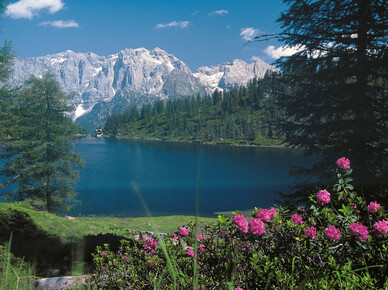 In the heart of the Adamello Brenta Nature Park, 1900 metres above sea level, lies an oasis of peace, tranquillity and freshness. From the shore you can enjoy a privileged view of the Brenta Dolomites. The pond is conveniently accessible by anyone on foot and makes for a pleasant stroll. From Passo Campo Carlo Magno, head to Malga Zeledria, where you can park your car. As you set out, follow the forest trail that climbs in the direction of the Rifugio Pradalago and after about 200 metres take a path on the right, following the road sign "Lago delle Malghette". From here, follow the indications of road-mark 201 and in about one hour you will reach the Malghette Mountain Hut on the eastern shore of the Lake. Take a break and enjoy the beauty and charm of the landscape! 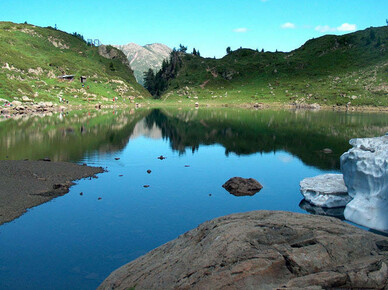 The lake lies in the wild Valle di Mocheni between woods, glades, alpine meadows and untouched nature. The climb up to the lake is known as "the Queen of excursions" because of the beautiful landscapes that you will encounter along the way. From Palù del Fersina, you reach the hamlet of Frotten and can park your car. From there, follow the (signposted) trail E 325 and in about one hour and a half you will reach the lake. Except for especially hot seasons, even in summer the lake is partly covered by snow and ice, which allows the water to maintain a very low temperature. Do not miss the chance to enjoy an all-natural, rejuvenating Kneipp bath!

In the heart of the other Nature Park of Trentino Parco di Paneveggio-Pale di San Martino, where you will find the quartz porphyry of the Lagorai mountain chain and the white and soaring peaks of the Dolomites of Pale di S. Martino. The comfortable path, broad and well trodden, starts from the parking lot of Malga Rolle (about 1 km from Passo Rolle), initially between larch and fir-tree forests, followed by a series of ups and downs, until it opens in the basin that hosts the two small mountain pearls. On the bank of the largest of the two lakes lies the Colbricon Mountain Hut, but the walk does not end there. Continue along the trail and walk alongside the two ponds: their banks are perfect to cool off on a hot day! 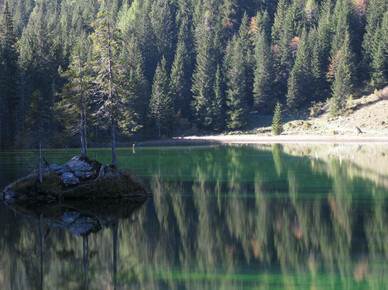 Like a pearl in its oyster, Lago di Valagola, nestled between Val Brenta and some of the most beautiful mountains of Western Trentino, is the pearl of a lush valley that is not overly touristy because it is closed to traffic. From the village of Sant'Antonio di Mavignola, a hamlet of Pinzolo, follow the signs for Val Brenta/Val d’Agola and the Brenta nursery until you reach the parking lot on a dirt road closed to traffic. A sign of the Nature Park will point the way, which follows the course of the Rio Valagola. At an altitude of 1460 metres, on a hairpin bend on the left, take trail 324 and after about one hour and a half of relaxed walking, the forest opens into a verdant glade where you will see the shimmering waters of the lake. You have reached your destination; now all you have to do is sit back and enjoy the show.