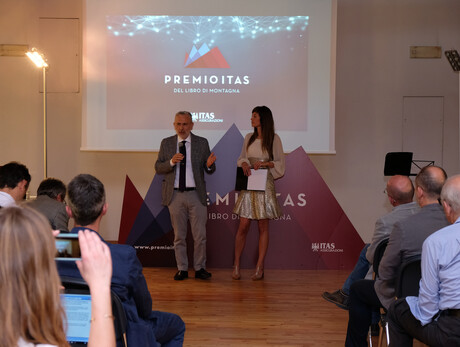 A reference point for publishers, authors and all mountain enthusiasts. This is the ITAS Mountain Book Award. Each year prizes are awarded to the best books dedicated to the “highlands”, classified in five categories: mountaineering and mountain sports; guides and maps; children's books; research and the environment; mountain lifestyle and stories. The overall winner of the ITAS Award is then chosen from among the winners of the five sections.

This year the ITAS Award celebrates its first fifty year anniversary. From 30 April to 9 May, in conjunction with the Trento Film Festival, there will be a series of presentations, conventions and events that once again will draw our attention to the wonderful world of the mountains.

“Once again this will be a special edition of the ITAS Mountain Book Award, given the period we are going through; but it is also an edition that, once again, is rich in stimuli and suggestions” explained Lorenzo Carpanè, the Award coordinator. “This year there are 110 books taking part in the Award, coming from fifty-odd publishers that represent the entire Italian publishing community: alongside the specialized publishers, this year the generalist publishers are presenting various works, both fiction and non-fiction and guides.

Among other things, the trend observed over the last few years has been consolidated: a focus, even in fiction, on the theme of “life in harmony with nature, and with the living universe of animals and plants”. Themes that we can find even in the special set of books for children: as we know, a very special audience”.

“The quality of the books we received has once again put us pleasantly in difficulty” added Enrico Brizzi, chairperson of the jury, who inherited the legacy of Mario Rigoni Stern almost ten years ago. “This enables us to continue in the best possible way with our mission, which is to imagine and interpret changes in culture and social life in a dimension, that of the mountains, which is the clearest reflection of our whole life”.

Carpanè highlights the fact that the Award program is very rich, despite the fact that the present moment imposes difficult choices. Alongside the presentation of the books that reached the finals, a convention is being organized to bring together authors, publishers and communicators of mountain culture, to celebrate the fiftieth anniversary of the Award. This will be followed by other activities in the territories with an increasingly enthusiastic audience attending the various cultural events which are not only Trentino based.

“Whoever goes to the mountains knows that the effort always brings with it a goal to reach, however small or large. Our goal is to accompany those who love the mountains to understand them more and more. And it is also, today, to remind everyone of the importance of the goal ".