The evolution of military modeling 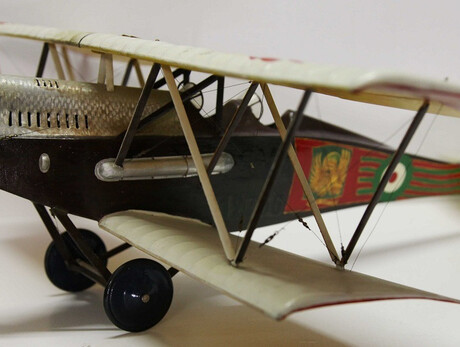 2 More images
Modeling as a tool of military strategy, as a testimony of war and finally as a collection item and as a game.
The exhibition, hosted in the spaces of the ex Pavese colony in Torbole (a village on the shore of Lake Garda), shows the different uses of models in the military sector, through objects and documents kept by the Italian Historical War Museum of Rovereto and loaned by associations and private institutions. Since ancient times, the scale reproduction of objects has been part of the everyday life. This practice has transformed over time: from devotional objects used in burials or as votive offerings, to models for increasingly complex artifacts. Before the digital age, scaled battlefield reproduction was an important tool for defining military strategies. Models were used as prototypes for creating military vehicles but also sculptures or memorials. In colonial times, models that reproduced landscapes of distant lands of conquest fed a new exotic taste in the civil population. Modeling, in its broadest sense, finally becomes in the twentieth century the mean by which historical events considered significant were rebuilt to scale. Only in the last few decades it has also been transformed into a collection and game item. The exhibition shows all these different aspects, offering a glimpse of the evolution of military modeling through models, dioramas and figures. The project is enriched thanks to the collaboration with numerous bodies and associations active in the modeling and collecting sector that offer also related activities and events during the opening of the exhibition. An exhibition in collaboration with the Province of Trento, the Municipality of Nago Torbole, Bim dell'Adige, Benàch Cultural Association, Raggruppamento SPA Association, the Fiat 2000 Tank Reconstruction Committee, Dolomites Bricks, the Italian Flames of War Federation, GAR Aeromodellisti Group Rovereto, GMT Trentino Modeling Group for study and historical research, Your Command!, Rovereto and Vallagarina Tourist Board, Garda Trentino Tourist Board, Madonna della Vittorie Farm and Marzadro Distillery.

From Tuesday to Sunday from 16pm to 22pm.

Free entrance for children within 14 years

The ticket allows a reduced-price ticket at the Italian War History Museum (€ 6 instead of € 7,50) and at the city trekking organized by Rovereto and Vallagarina Tourist Board (for every two participants with a ticket of the exhibition, a guided tour is free)