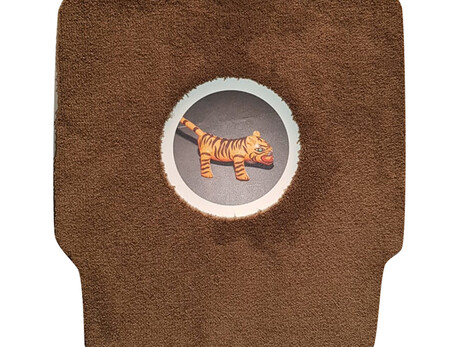 Dido Fontana is ready to be touched - all of him!
Didddo - Touch Me! is the new project by the Trentino-based photographer, presenting new artworks in between photography and sculpture. From marble to carpet, the combination of materials enriches the images with a new and provocative – of course - texture. In this a journey beyond aesthetic symbols and pictograms evoke deep conscious states, while memories and desires surprise the viewer, suddenly pushed to face the own animal self.
+
Dido Fontana + Zoe Lacchei: a four-handed job.
Zoe Lacchei's new Neo Shungas - freely inspired by Japanese erotic prints - are a return to her origins; moving away from the pop-surrealist current, Zoe focuses more on the symbolic to espouse the photography of Dido Fontana. The result is a sequence of lustful scenes, photographic and graphic works with daring joints that move between tradition and future, born from Dido + Zoe.
+
Presentation in Trento of From the Love of Truth, using his crossover vocabulary between fashion, communication, publishing by Dido Fontana.

Dido Fontana is an Italian photographer, born in Mezzolombardo in June 29th, 1971. He lives in Borgo Valsugana, a small village next to the Brenta river in Trentino, Italy and he works around the world.
He does not retouch his photos because, as he's used to say, reality itself is even too interesting. His style has been defined anti-fashion and neo-baroque. The photographer's recent work is between his solo and group shows in Europe and United States and the commissions he has been given by the world of fashion, communications, and publishing. This is, overall, a wide-ranging production in which two areas, specifically those of creation and commerce, have melded together to allow the emergence of an omnivorous creativity and a strong photographic personality, both with regards to the interpretation of his means and for the definition of his subjects.

Zoe Lacchei is a popular Italian Artist known all around the world, who grew up in a small and quiet town near Rome. Since 2017 she lives and works in Trentino-Alto Adige/Südtirol.
After high school, rather than attending regular academic courses, she focused on the subjects she loved the most, such as human anatomy and the Japanese culture.
This last one has affected her enormously: she simply adores Japan, with its contradictions and oddities, with its great sense for the art of image, in a traditional and at the same time modern way, given by Manga, Anime and videogames. She works in the creation of character designs for comics and video games but never signs any of these works. In April 2004 she created thirteen paintings for the Marilyn Manson's Gold Disc ( for "The Golden Age of Grotesque"), collected afterwards in the original portfolio "Metamorphosis - The Art of Zoe Lacchei". Her work on Marilyn Manson's visual evolution has crucially marked her artistic career, on a graphic level but also in terms of visibility. Eclectic, passionate, Zoe Lacchei has published several works and has taken part to many exhibitions. Her unmistakable style is a fusion of several traditional techniques and materials.