From 13 May 2020 the exhibition dedicated to Chiara Lubich is enriched with a VIRTUAL TOUR which, through images and documents, makes it possible to visit the exhibition from all over the world. 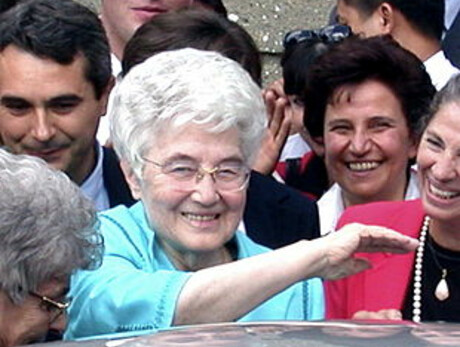 From 13 May 2020 the exhibition dedicated to Chiara Lubich is enriched with a VIRTUAL TOUR which, through images and documents, makes it possible to visit the exhibition from all over the world.

An exhibition dedicated to a Chiara Lubich - who died in Rocca Di Papa (Rome) on 14 March 2008, and whose cause for beatification is on the way -, recognised as one of the most influential figures of the twentieth century in the spiritual, cultural and social spheres and in relations between peoples, cultures and religions by virtue of her commitment to dialogue and universal brotherhood.

Chiara Lubich was awarded the 'Unesco Peace Prize 1996' and the 'Human Rights Prize 1998', 16 honoris causa doctorates in various disciplines and several honours, including many honorary citizenships, at national and international level. Her thought influenced a new way of life in the civil, economic and political spheres, promoting sustainability and the sharing of resources, support and acceptance of the weak, dialogue between peoples and cultures, and with people who do not recognise themselves in any religious creed.

The story of the significant moments of her life, thought and work is developed in a varied exhibition, in which documents, autograph writings and photographic evidence are accompanied by videos and installations with which to interact.

This exhibition was not created with a celebratory intent, but is driven by the desire to re-propose to a wider public the message of the young woman from Trento - who, amidst the rubble of war, discovered in the Gospel the only ideal that does not crumble and the way to a holiness that is "accessible" to all - in order to take up her legacy and confront her charisma today.

The conceptual and exhibition itinerary

The title of the exhibition identifies a double path, both historical and symbolic. It starts from the local reality of Trento in the early 1940s and opens up to the most varied realities in the world: it is the story of the birth and development of the Focolare Movement, which started in the little house in Piazza dei Cappuccini, 2 (the home of Chiara and her first companions where the charism of the nascent unity was first carrried out and encouraged) to reach five continents, and today 194 countries with more than 2 million members, mostly Catholics.

At the same time it describes the universal character of Lubich's message, so that from the very beginning people from different countries seek a personal encounter with Chiara, attracted by that spirituality of unity, capable of transcending the boundaries of races, cultures and religions, and of concretely building relationships of brotherhood.

The tension in the couple city-world is thus manifested as a fruitful relationship, the fruit of a secret revealed to her, which the experience of the exhibition route wishes to convey. Lubich herself brings together both dimensions, through her being a citizen of the world, in dialogue with distant peoples and cultures.

In her mindset, the city is understood as a place of dialogue and relationships, a synthesis of multiple realities, perspectives, sensibilities and dimensions for a new way of life, which builds unity while valuing diversity.

The exhibition space at Palazzo Scopoli

Parallel to the exhibition at the Gallerie di Piedicastello in Trento, the exhibition finds further space in the rooms of Palazzo Scopoli, in Tonadico, in the municipality of Primiero San Martino di Castrozza (in the province of Trento).

Exhibitions in the world

During the year of celebrations for the Centenary, the exhibition "Chiara Lubich, City World" will be replicated in various non-European capitals: New York, Mexico City, Sydney, Mumbai, Sao Paulo, Jerusalem, Algiers and Nairobi.

The Trentino history museum foundation and the Chiara Lubich/New Humanity Centre in collaboration with the Ministry of Education, University and Research promote the competition “Una città non basta. Chiara Lubich cittadina del mondo” (One city is not enough. Chiara Lubich citizen of the world"): an opportunity for students of primary and secondary schools to explore Chiara Lubich's thought in the light of national and international events that have characterised the history of the twentieth century.