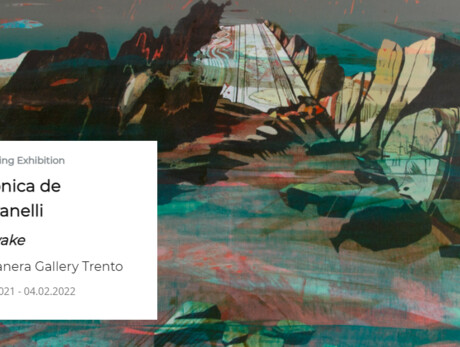 The immensity and drama nature of the Nordic landscape, its tension at the meeting point between land and water and the roughness of the rock are some of the main subjects of the works on display. In the gallery space, large-format canvases alternate with small-format paintings and small fragments of paper and collage that suggest an unreachable, sometimes invisible nature, yet interpreted and evoked, in all its particularities, through a sort of magnifying glass.

Veronica de Giovanelli tells of a stratified and almost immaterial nature in the dilution of its forms. She reconstructs a geology made up of sedimentation, volcanic explosions and erosion. And as she herself says: “The starting point for each painting can be very different: photographs taken or found, ancient geological maps, rocks seen under the microscope, poems or stories.”

The title of the exhibition – Andvake – comes from a word in Nynorsk: one of the two official writing forms of the Norwegian language. Andvake evokes various meanings, including insomnia, wakefulness and vigilance at the same time. For Veronica de Giovanelli, the word refers to a heightened attention to what surrounds us and at the same time to that moment of constant tension that every artist experiences when creating a work. It is the moment in which the incessant dialogue with the image-in-the-making – made up of attempts, risks and second thoughts – also implies a very long period of active observation, one which never really manages to abandon the soul of its executor.

The works are fourteen.